SPECIAL :: Inside the Lundby newspaper

A tiny, folded newspaper is normally glued inside the Lundby newspaper rack (Item 6855 in the 1977 Lundby catalog). I was curious but had never actually tried to read the Lundby paper until I came across a loose one without the rack.

It appears to be a miniature copy of Svenska Dagbladet (meaning “Swedish daily paper”). This is a real Swedish newspaper that has been published since 1884 and is distributed throughout Sweden. Svenska Dagbladet is online, and some of its recent content is available in English.

I can’t make out the date of the mini Lundby paper, but the headlines provide some clues. Read on for a translation of some of these headlines (thanks to Google Translate). Swedish speakers, please feel free to correct me! 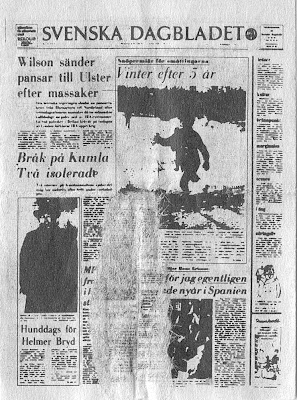 
Wilson sends tanks to Ulster after massacre (Wilson sänder pansar till Ulster efter massaker). This is likely referring to UK Prime Minister Harold Wilson, who held office from 1964 to 1970 and from 1974 to 1976, during the conflict in Northern Ireland.


Dog days for Helmer Bryd (Hunddags för Helmer Bryd). Helmer Bryd was the alter ego of Gunnar Svensson, who was a leading Swedish jazz musician and singer. Helmer Bryd hailed from Mosebacke Monarki, a fictional state in the middle of Stockholm created for a satire series on Swedish radio. 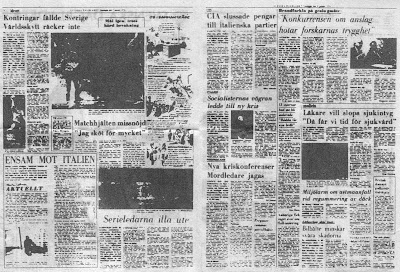 The inside left page is part of the sports section, and headlines may be referring to the Olympic Games:


The inside right page has political and health stories (the real newspaper undoubtedly contained a whole center section, but more pages would have made the mini version too thick for the wooden rack):


Seatbelts reduce serious injuries (Bilbälte minskar svåra skadorna). Perhaps this is what prompted designers of the Lundby family car to include seatbelts (in the front, anyway)! 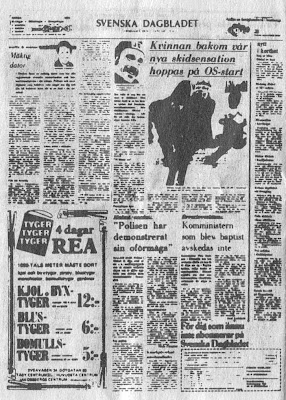 The back page features what appear to be local news stories:

The mini Lundby newspaper is a great little piece of history—a window into life at the time.Would you like to add this loose newspaper to your collection? Be the first to leave me a comment here or email me with your address, and I will mail it to you free of charge!
Posted by Vintage Lundby

Vintage Lundby
United States
Maybe you're as crazy for Lundby as I am? I fell in love with it as a girl and again years later when I started missing my long-lost childhood collection. I especially love Lundby's attention to detail and how the houses and furnishings reflect design trends, past and present. Thanks for stopping by! --Julie